Home Sports Uganda Cranes reminded us of what an honour it is to...

Yesterday [4th September of 2016], the Uganda cranes reminded us of what an honour it is to be Ugandan with their victory over Comoros for the 2017 world cup qualifiers that will be taking place in Ghana. The winning goal was scored by Farouk Miya who is well-described as “Muyizi Tasubwa”, a Luganda saying meaning “a hunter who cannot miss”. Farouk has been with the Uganda National team since 2014.
When miya scored the winning goal (KCCA IMAGE)

After Miya scored the winning goal.

The legendary game took place in the Mandela National stadium with over 60,000 enthusiastic supporters despite the stadium having a capacity of 40,000 people. The hashtag #MujjeTulumbe trended on Twitter and Facebook creating more hype and unifying all Ugandans for this special cause that was greater than all of us.
First lady(image- Sarah kagingo)

The stadium was filled to the brim and this spilled over to the roads leading to Mandela National Stadium, Namboole. Black yellow red is what you could see everywhere as fanatics donned their special Uganda Cranes jerseys and raised their voices called for a miracle that did come.
Starting Lineup 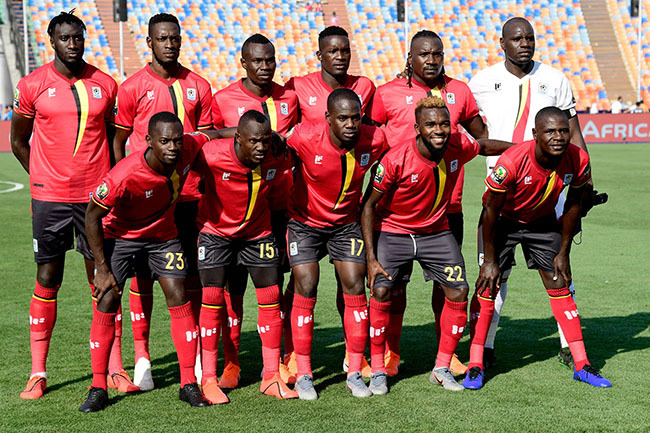 It was a delightful occasion for Uganda as it brought healing from the scars that had developed over the past 38 years of lost trial. You can imagine how many patriotic hopefuls had consistently been making losses from the various investments they would make around these much-anticipated games only to see fans walk past them in disappointment without merrily buying anything in jubilation.
Last team to qualify

Throwback to 1978, Uganda was 2nd runner up in the AFCON and this was the last time we ever witnessed soccer history in Uganda. Most of the folks that crowded Namboole last evening were not yet born or just toddlers by then but they understood too well, the cost of qualifying again, history repeating itself in all its majesty.
Makeup artist Usheretto(IG) watched the game in this setup

The patriotism displayed by people all over Uganda characterized by cheers and screams over the years regardless of whether we qualified or not has been overwhelming and growing year by year. Sounds from vuvuzelas and praises sung by supporters were sure to propel the Uganda cranes even higher. With the city painted black, yellow, red [the colours of the Ugandan Flag], it was a grand day that did not leave us disappointed.
the sick came(image- deecesca)

Even the sick made it to the stadium.

Ugandans around town prepared to celebrate in advance as bar owners stocked beer and muchomo for the good merry well-wishers and diehards of the Ugandan football team. This anticipation and then victory was exclusive to the football lovers but to all the people of Uganda. What a great display of patriotism!
Fans leaving the stadium (photo credit- KCCA)

Fans leaving the stadium after the match.

Cool showers graced the evening and like popular belief, blessed the day, preparing our hearts to receive the much-anticipated victory over Comoros. Uganda eventually qualified for the 2017 Africa Cup of Nations due to being one one of the two runners-up with the best records and we do hope it will make similar progress on its way to the World cup.
#Rwanda Kigali convention centre lit up in Ugandan colours after #UgandaCranes historic win(image by- Athan Tashobya)

We thank the Uganda cranes for making us proud. For raising our flag high and for breaking the 38-year streak and qualifying for AFCON 2017- Gabon, here we come!