In the South-Western Ugandan district of Kanungu lies a village called Nyakagyezi. In this village, many people especially women and children live in poverty – Mainly due to being orphaned by AIDS an epidemic that killed many people in Nyakagyezi.

Jackson Twesigye Kaguri, however, managed to escape this poverty. He went to Makerere University, advanced his studies at Columbia University, and moved to the United States of America where he planned to stay for most parts of his life. He’d often come back to Uganda, handing out school supplies to children. But he wasn’t settled.

“In Uganda HIV/AIDS came striking like a machete in a cornfield, killing men and women, leaving 1.2 million children orphaned,” Jackson told CNN shortly after winning the 2012 CNN Hero of the Year Award.

The burden of looking after his deceased brother’s three children lay on his shoulders. He paid for their education and made sure they had food, clothing, and shelter. But this caused him to think about his whole village. He wondered who would care for all the other young AIDS orphans.

“These are women who saw me growing up in the village. They had carried me when I was hurt. They prayed for me when I was away studying. What was I supposed to do?” Jackson told The Spotlight recently.

He rolled up his sleeves and he took his life savings — the $5000 he and his wife were going to put towards buying a home — and built a school for the orphaned children in the village brick by brick.

In 2001, he founded the Nyaka AIDS Orphans Project. It began in the Nyaka Primary School, a two-room school on a small plot of land which would later provide free education and school clothing. The school officially opened in 2003 to 55 students, all HIV/AIDS orphans.

Jackson later realized that he needed to expand the project beyond just two classrooms. He had to do one job — tell his friends in Uganda, the United States and anyone who was willing to listen to his story. This was the only plan to see more classrooms. Fortunately for him, many people he talked to listened to him mostly because they believed that education could help the orphans of Nyakagyezi. They believed it could help them escape poverty and achieve basic human rights. So, they offered money to support the project.

Life for the children orphaned by AIDS in Nyakagyezi has greatly improved. In December 2008, the school held its first graduation ceremony. The whole village celebrated as the first students of Nyaka School finished their primary education.

Today, there are two schools – one in Nyakagyezi and one in the village of Kutamba. Together the schools serve almost 43,000 orphans whose parents died from AIDS  as well as helping over 7,004 grandmothers learn a trade to help them support themselves. 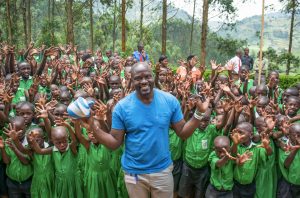 over 43,000 orphans have benefited from the Nyaka Schools. Photo credit: Matt Stauble

Kaguri’s work is now even larger than the schools. He has also helped build a health center, more clean water tanks, and a library for books. Kaguri continues to dream of doing even more. And he encourages other people to do the same.

In 2010, he resigned as Interim Senior Director of Development in the College of Agriculture and Natural Resources at Michigan State University to focus full-time on The Nyaka AIDS Orphans Project.

Jackson was officially named the winner of the 2015 Waislitz Global Citizen Award in New York City. in 2010, he was recognized in Time Magazine’s Power of One, has been named a Heifer International Hero, was a 2012 CNN Hero of the year, and has given a TED Talk based on his book A School for My Village: A Promise to the Orphans of Nyaka, which remains one of the best-selling autobiographies to ever come out of Uganda.

As Nyaka AIDS Orphans clocks 15 years this year, growth is the only word that can explain it. On this year’s World AIDS Day, Cornerstone a documentary movie based on Jackson’s life journey will be premiered. Watch the trailer here.

A Ugandan teenager has won the prestigious Shakespeare scholarship in Sydney

Meet the Ugandan that featured in Captain America: Civil War